Blazing sunshine beating down on a parking lot near the Innovation and Design Building in Boston’s Seaport District on a recent August afternoon didn’t deter a group of Black and Latinx teenagers excited to spray paint their names with laser-cut stencils on BeND, a curvy public inhabitable installation they built as the culminating project for a free summer program created to giving low-income Boston youth a pathway into the design and construction industry.

“You can put your name on the structure six times but be careful not to walk over what has already been spray-painted,” says Parke MacDowell, an architect at Boston-based architecture firm Payette who led the design and fabrication of BeND and developed the curriculum for the 22 students.

The $75,000 sculpture installed in the Seaport on Sept. 2 will remain there through October. The installation including seating, a canopy and play-space is “not prescriptive about how you use it,” says MacDowell, who was named an ENR New England Top Young Professional in 2020. He said the program also helped students practice “creative problem solving” while they gained “new technical skills through theoretical and real-world projects.”

The five-week design studio also earned each student three no-cost college credits, almost $2,200 in wages, and portfolio material that can be used to apply for college and career opportunities. Richard Kayondo, 20, who graduated from high school in 2020 was one of the apprentices swarming around BeND’s curvy surfaces like honeybees in search of the perfect place to inscribe their names. “I wanted to go back to school but didn’t know if I wanted to study construction management or architecture,” he says. “Now I know I want to study architecture at Wentworth [Institute of Technology].” 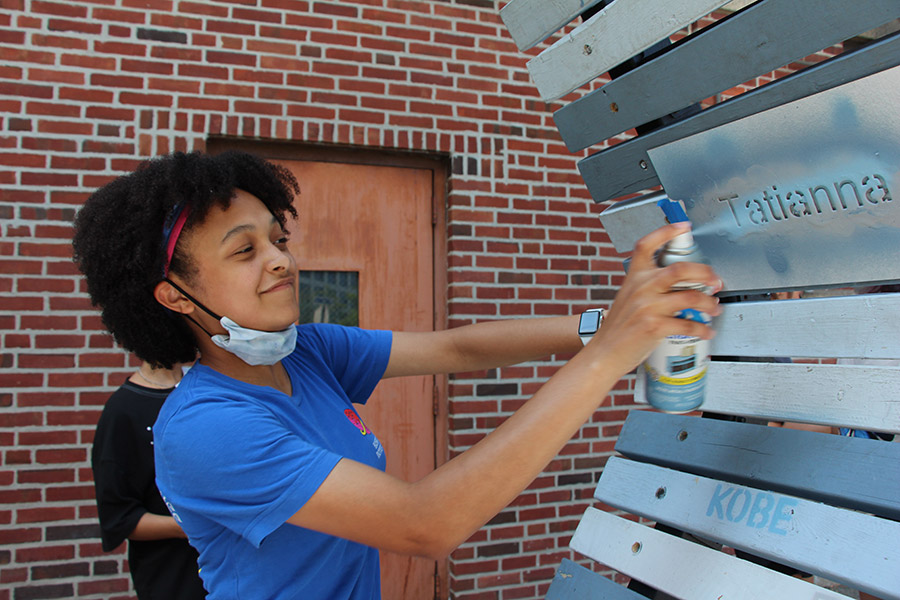 Tatiana Reid spray painted her name with a laser-cut stencil on BeND.
Photo by Johanna Knapschaefer for ENR.

The apprentices are part of the Boston nonprofit Digital Ready’s Architecture & Construction Pathway, which provides an early college path in architecture and construction for Boston youth. Digital Ready “saw this multi-purpose structure as cool extra seating to encourage conversation and play,” says Sarah Cherry Rice, executive director at the nonprofit. The studio focuses on involving Black and Latinx students in “place making in their own communities … so they can be part of the design conversation for the City of Boston,” Rice adds.

In spring students take their second architectural studio class for four college credits and by next summer they are placed with one of Digital Ready’s industry partners in their six to 10-week apprenticeship program. 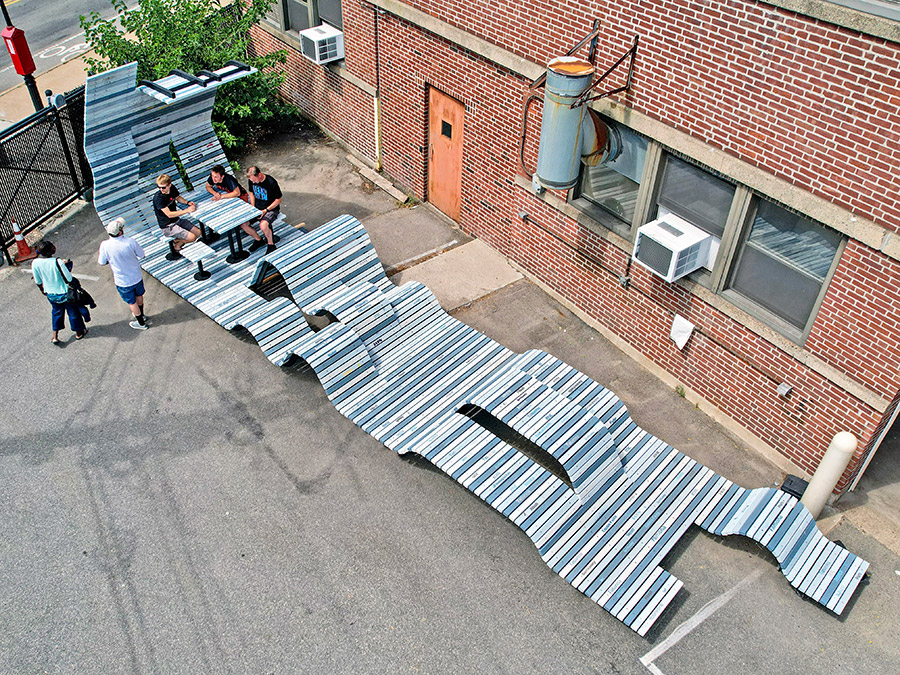 The $75,000 sculpture is was installed in Boston’s Seaport District on Sept. 2 and will remain there through October.
Photo courtesy of Beyond Walls

Work on the 40-ft-long by 10-ft tall undulating steel frame structure with a painted wooden deck began in June before the students started fabrication. Working with power tools for the first time was challenging for Tatiana Reid, 15, but she says it got easier with practice.

The program also offered mentorship opportunities for students as well as interaction with industry professionals from industry firms sponsoring the program, including AW-Arch, Bruner/Cott, Runcible Studios and Safdie Architects. WS Development provided the Seaport installation site and a $5,000 grant. During a tour of Boston-based design firm Elkus Manfredi’s office, Reid fell in love with schematic drawings, which reminded her of Legos. “I like designing Legos so I might like architecture, too.”

The Black Latina freshman at Boston Latin School also fell in love with computer modeling. “It’s really cool to see a model of the design come to life,” she says.

Design exercises helped the students improve technical skills such as sketching, 3D modeling and portfolio development. Sophie McKenzie, Digital Ready’s summer session studio manager, who also works full-time at Payette as a design/fabricator, was impressed by how quickly the students learned skills completely unrelated to anything they have studied at school. For example, learning Rhino 3D software was “a really difficult task” for McKenzie as a freshman at Wentworth, where she also earned a master’s degree in architecture. She said watching the teens perform such tasks at the same level as she did as a college freshman, “if not better than how I started out in college, was so crazy and really inspiring. … They surprised us with how creative they were; they would try to do things within programs or through physical iterations.”

In the shop, McKenzie and the other staff members found themselves expanding planned lessons when students asked to go beyond the curriculum.

Digital Ready allied with Beyond Walls, a Lynn-based non-profit that helps create public art and curated experiences in the community. Beyond Walls also worked with architects at Payette to design BeND. Al Wilson, who founded Beyond Walls, says the project was a great “opportunity to connect youth who are interested in design and construction with an actual, built project to support their studio curriculum. The students really made-it their own, building and painting the wooden deck that wraps the undulating steel frame to become seating, canopy, and play-space.”

Jonathan Hua-Phan, 16, an incoming senior at Excel High School in South Boston, wants to study architecture in college. “It’s good to learn Rhino and other things now so it’s easier in the future,” he says. Earning money as he studies is also a win-win for his family. “What I learn will have a big impact on what I do in college,” he says.